Click on the element to jump down to it's information box.

The author is one of the most important parts of a citation. Why? In order to properly connect ideas, inventions, and works, there has to be someone to credit with creating it! It is also a great way to help you evaluate the source of information for context and bias. The author or creator can be an individual, a group of people, or a corporate institution. You may also find additional information with the author's name, like his or her education/credentials and professional affiliations.

The basic format for citing the author is:

Scroll through the subsequent tabs to find information about how to cite various kinds of authors.

For more details see page 111 in the MLA Handbook.

When there are two authors you will include BOTH names.

For more details see page 111 in the MLA Handbook.

When there are three or more authors, things can get very confusing and your citation becomes really long. To avoid confusion and unnecessary length, your author element will look similar to that with two authors.

For more details see page 112 in the MLA Handbook.

When using media works as a source, the individual that was the main focus of your research should be the leading name in the citation.

Include the person's name, add a comma after the name and a label of that person's role in the production.

No specific focus? No worries! Begin the citation with the Title, include the names of the director and other participants in the other contributor element.

Sometimes authors write under another name. Use the pen name like you would write a regular author's name.

If the author is not well known or better known under a different name, and you do know both the pen name and the real name, list both. Include the author's real name in brackets, using normal name format.

​If the author is writing under a pseudonym, but his or her proper name is found on the page, use the pseudonym and add the real name in brackets [ ].

A modern take on pseudonyms are online usernames. We use these to identify ourselves in various social media platforms. This can be a way to offer people anonymity or simply as a function of participating in this form of communication. Blog and Twitter accounts use such names frequently.

After you have scoured your source and still can't find an author, what do you do?

For more details see pages 49,120 in the MLA Handbook.

The second most important element is the title of the source. Without a title it would be very hard, if not impossible, for someone to figure out what resource your are citing. Luckily, titles are usually prominently displayed in the work. Copy the full title in exact same way it is written out on your source.

The basic formats for citing the title are:

Scroll through the subsequent tabs to find information about how to properly format the title.

According to the MLA Handbook, it is expected that you "capitalize the first word, the last word, and all principal words" (54).

Do NOT capitalize the following words, unless it is the first word of the title or subtitle:

For more details see pages 54-56 in the MLA Handbook.

Use a colon and space to separate the title from the subtitle.

Use the given punctuation where appropriate. For example:

Krager, Derek A., et al. "Where Have All the Good Men Gone? Gendered Interactions in Online Dating." ...

For more details see pages 59-62  in the MLA Handbook.

Poems are traditionally the most common instance when the work may not have title. These days, depending on what your instructor allows you to use as a source, you may encounter instances where you are using a form of  social media communication, like twitter. In both cases, you will write out the first line, or the full tweet (it's only 140 characters after all).

Be sure to format the title as follows:

What is a container?

A container is the bigger entity that your piece of information is published or displayed within. It can be many things, like a book, a website, a journal or newspaper, a TV series, a music album, etc. You have to think critically about how the information that you are using is a piece of a puzzle.

What do I put in it?

The information we include in the container are standard pieces of information to guide anyone to the larger source. This will include: 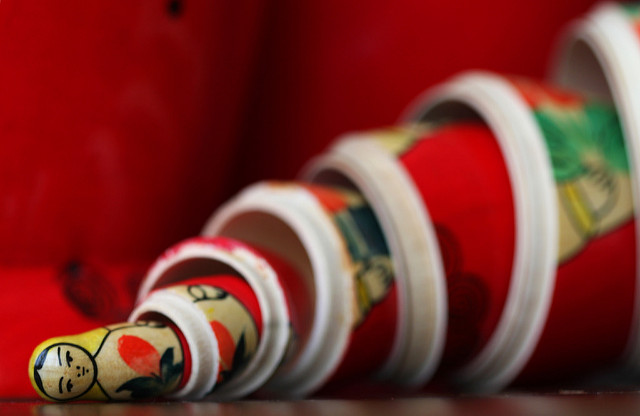 Pay attention to the punctuation!

Scroll through the subsequent tabs to find information about all the various elements you might include in the container.

The specific rules for the container's title are:

See the Title box (above) for general details about how to format a title.

Article published by a magazine or newspaper, and found in a library database.

NOTE:  The database is the second container.  It, too, is italicized.

Sometimes, a source of information has other people contribute to the creation of the larger content. Include the people that are important to your research, preceded by a descriptor of their role. These descriptors may include:

Márquez, Gabriel García. Love in the Time of Cholera. Translated by Edith Grossman, ...

If there are multiple versions or editions where the information is published, you will want to indicate which edition you used. This is important because newer editions typically include updated information.

More often, you're going to encounter an edition of a book. Make sure to do the following:

Information may be packaged within a container that is part of a series. This is important to list to make it easy for you and your reader to find that specific volume of a book; issue of a magazine, newspaper, or journal; or episode of a show. Possible numbers and the proper abbreviations are:

Sometimes you have to include a combination of numbers, like volume and issue for a magazine or journal article.

Harold, Franklin M. In Search of Cell History: The Evolution of Life's Building Blocks. U of Chicago P, 2014.

The publication date is the date that this information was made available. These can include:

To keep it as simple as possible here are some points to think about:

Depending on the medium in which the information is created, location could mean:

Why does a citation have to have two containers?

Depending on how we get information, it may be housed in a larger information house. Typically, you'll use two containers if you are using a source from the library's databases.  This includes articles from newspapers and magazines, streaming videos, and eBooks. Include all elements that will be valuable to locating the source.

Scroll through the subsequent tabs for common examples of a use of a second container.

Think of a database like a big, virtual library. This is a larger container in which the information is housed and accessed. Typically, the elements to be listed in this type of container will include:

Since the following citations have two containers (the newspaper/journal and the database) there are two locations included, a page range (as part of the first container) and a web site address (as part of the second container):

When a source has been reprinted or republished in other locations, you should include the provided information for the original publication. Place all the elements in the same order as the first container.

Article reprinted in a book.

For more details see page 53 in the MLA Handbook.