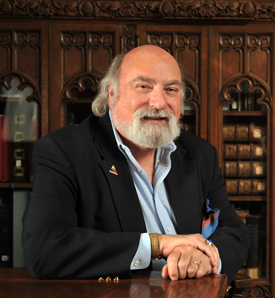 Called to Teach, and More

Professor, author, historian, park ranger,  historic interpreter,  Civil War expert — all these and more can be used to describe George Vourlojianis, who began  his teaching career at LCCC in 1990 and has been a prime mover in the Civil  War Discussion Series, held largely at LCCC in September and October of  2013.  Funded by the Ohio Humanities Council to commemorate the 150th  anniversary of the Civil War, the series allows George to follow his abiding  interest, Nineteenth Century American History – Slavery, the Civil War and Reconstruction.  However, he also has concentrated on U. S. Immigration History, the U.S. in the Twentieth Century and the history of The Balkans and Eastern Europe.

“I was put on earth to teach,”  says Vourlojianis, who, during his career spanning more than two decades has been honored many times for allied achievements — the LCCC Faculty Excellence Award (2002 and 2012), The Kent State University Distinguished Teaching Award for Arts and Sciences (1999-2000) and the outstanding faculty adviser “Horizon” Award (2006) for the Phi Pi Chapter of the Student Honor Society, Phi Theta Kappa.

On the faculty of John Carroll University as well since 1997, Vourlojianis there lectures on the Vietnam War, World War II and American Military History.  His credentials for the latter are especially noteworthy as the 1999 recipient of the  United States Military Academy’s History Fellowship, awarded to research,

study and teach military history at the Academy at West Point, New York.  Administratively, at LCCC Vourlojianis served as Interim Dean of the Division of Social Sciences and Human Services from 2003-2004.

Earning both his bachelor’s  and master’s  degrees from John Carroll University, the Beachwood native received his PhD in History from Kent State University, where he also taught part time from 1993-2007.  During his days as a graduate student and ROTC cadet, Vourlojianis’ studies were interrupted when he was called to duty during the Vietnam War. “My draft number was 39 – it was the only lottery I ever won,” he quips.

Vourlojianis’ doctoral dissertation was titled The Cleveland Grays: an Urban Military Company 1837-1919, so a book of the same name logically followed and was published in 2002.  He also penned Citizen Soldiers: 107th Cavalry Regiment Ohio National Guard, which appeared in 2007.

His students might be intrigued to know Vourlojianis has worn other hats, specifically that of a park ranger at the James A. Garfield Historical site and Perry’s Victory and International Peace Memorial in Put-In-Bay, Ohio.  He has also done research at Little Bighorn Battlefield National Monument, serving as a consultant.

Vourlojianis has delivered numerous presentations on the Cleveland Grays, Cleveland in the Civil War and the 107th Calvary Regiment to various civic organizations. He has also served as consultant to the National Park Service, the Ohio Army National Guard and the Western Reserve Historical Society.

Additionally as part of Bass Library's Focus on Faculty theme, the LCCC Library will host Vourlojianis on Wednesday, October 30, 2013, when he will discuss Why does the Civil War Matter today? The presentation will take place in LC 231 from 12:30 - 1:30 pm.  It is free and open to the public.

Dr. Vourlojianis tells us to look for additional discussions on the Civil War in the next two years as the focus on this critical historical event persists, even after this sesquicentennial commemorative year of 2013 passes.

A recording of his presentation, Why Does the Civil War Matter? is available for loan through the Bass Library.