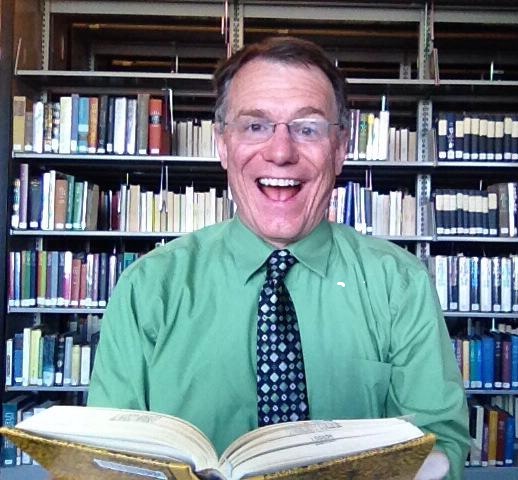 “An office like Dumbledore’s—one that’s magical” is one of the aspirations of Mike Substelny, this fall’s featured faculty member  in the LCCC Library’s ongoing Focus on Faculty Series.  The presentation, “Games in Education,” will take place September 23, 2014, in LC 231 from 12-1 pm.  At that time Mike will discuss uses for games and simulations that are educational, experimental, and therapeutic. He will also share a few thoughts on the computer game industry and ways it might someday flourish in Lorain County. The presentation will include live demonstrations.

A visit to Substelny’s  office,  located in the LCCC Library and Learning Resource Center, will indeed bring you into the fascinating world of this Renaissance man,  known not only as a tech problem solver on the Distance Learning Team but also as an Assistant Professor who ushers his student through an Introduction to Computer Games and Simulations each fall.

In Substelny’s office Dumbledore’s  magical memory gathering  pensiève is absent, but present are equally thoughtful and telling  items—a strange looking helmet  (like a bicycle helmet) supported by a stand made of brightly colored children’s Legos, classic car items and award plaques, to mention just a few.

Each has its significance.  The helmet, called Play Attention, is an occasional prop in his games class. The purpose of this NASA-originated device is to monitor brain waves associated with focus and cognitive processing. Feedback is presented in a video-game format to the user along with strategies to maintain concentration and minimize distracting behaviors.  Just the thing for a proponent of gaming in education, wouldn’t you say?  And why not engineer a stand of Legos when Substelny has long been the colorful Master of Ceremonies at the Lego Olympiad held at LCCC every spring.  Sponsored by the Society of Manufacturing Engineers (SME) and Nordson, the Olympiad cultivates the engineers of the future.  The exciting competition for young people—now including an increased number of young girls— awards the inventiveness of mechanical landscapes and creative iterations of differing Lego robots.

Still speaking to Substelny’s intriguing office contents, it would follow that the DeLorean owner and former president of the DeLorean club would also have models of classic cars in his office.  Also numerous award plaques are visible on his office shelves, many of which come from Cleveland State University where Substelny, a lifelong Cleveland native and former member of the LCCC Division of Engineering and Technology, received a Bachelor in Industrial Engineering in 1992 and an MS from there as well in the same field.

The degree of industrial engineering, which attempts to bring together the human elements with technology, business and productivity, seems especially aligned with Substelny’s other interdisciplinary interests which include creative writing in science fiction.  Substelny is the Artemis Mission Chief Script Editor, Artemis being a commercially successful science fiction computer game. His friends can attest to many enjoyable hours spent at the consoles of this interactive game. He has also served on Artemis’ Board of Advisors as well as being a presenter at Artemis (Spaceship Bridge Simulator) conference in 2012, along with LCCC instructor, Thom Robertson.  July of 2014 saw Substelny at NASF, the North American Science Fiction Convention held in Detroit and aptly called Detcon, after the city which hosted it.  There he was part of a panel discussion on “Other World Building.”  Modestly, Substelny confided that he was especially pleased to be sharing the table with such notable science fiction writers as John Scalzi, Carrie Patel and John Davis.  Those who search on IMDb will also find a satirical film authored by Substelny. The comedy short is titled Uncivilized Servant and involves a future world where the government has provided civil servant androids.

Not surprisingly, Substelny is a advocate, promoting the teaching of Science, Technology, Engineering and Mathematics in the classroom.  His joint presentation with LCCC’s Dr. John Crooks on “Building a Successful Camp for Middle School Girls” at Tech in October 2011 displayed data supporting how such camps have been extremely instrumental in placing women successfully into fields tied to the curriculum. More recently, in May 2014, Substelny chaired the very successful Digital Game Development Conference at LCCC titled “Level Up 2014.”

When he is not teaching or debugging or conference going or  science fiction writing or inviting friends for a ride on the Rocket Car at one of his many parties, you can find Substelny cycling for Muscular Sclerosis, a disease whose cure he passionately seeks.  His wife Patti, who suffers from MS, can attest to that.

If you have additional questions, please contact Rita Blanford: rblanfor@lorainccc.edu OR 440-366-7279.  A recording of his presentation, “Games in Education," is available for loan from the Bass Library.